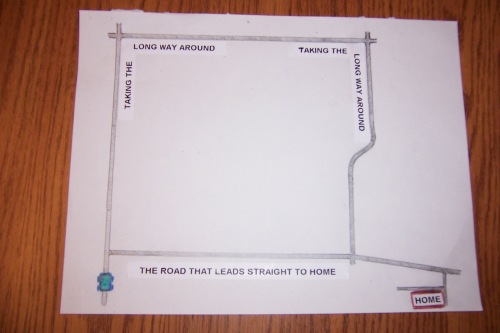 I was feeling totally exhausted as we pulled into the church parking lot that Wednesday evening.  The long drive to church seemed longer than usual. I wasn’t up for the challenge of keeping the girls corralled while I punched their names into the computer at the check-in station.  So I asked Brynna to stay in the van with them while I went in and got their name tags.  I came back to the van, slapped their name tags on the front of their shirts, and thought it would be a breeze to take them to class.  But it wasn’t.  She touched her.  And then she touched her back.  And then she called her a name. And then she called her a name back.  I told the teacher it hadn’t been a good day, wished her good luck, and made my way toward the sanctuary.

We were halfway home and it started to rain.  The closer we got to home the harder the rain began to fall.  I was completely stressed out because I was having trouble seeing the road.  All I wanted was to get home, crawl in bed, and call it a day.  We were finally getting close to home.  All I had to do was turn right, drive a few miles, and we would be home.  But my gut was telling me to drive around the long way.

The road that leads straight to home sometimes gets under water when it rains really hard.  We had been away from home for nearly 5 hours.  I had no idea how much rain had fallen during that time.  I knew my nerves weren’t up for the challenge of backing up in the dark to find a place to turn around if there was water in the road.  The last thing in the world I wanted to do was take the long way around. But I couldn’t shake the feeling that I was supposed to drive around.  So I heaved a deep sigh and took the long way around.

I was tired and totally irritated.  So I did what I always do when I’m tired and irritated.  I started to cry. When it’s raining cats and dogs and you can barely see the road it’s not the best time to start crying. But I did.  It had been a day that felt like it was never going to get over.  And taking the long way around was making a really long day even longer.   I couldn’t see the yellow line or the white line.  I was just hoping that I was on my side of the road.  Every now and then other vehicles were coming towards me.  Their headlights helped me know that I was on my side of the road.  I was thankful that I wasn’t the only one traveling this road.

As the rain pounded our van I began to think about how this moment reminded me of how I often feel about our life.  Raising Mikayla & Hope feels like we have to take the long way around while a lot of other families get to take the road that leads straight to home.  A lot of our days appear to be dark, rainy, and lonely.  Sometimes I feel as if I’m fumbling around in the dark and I can’t really see exactly where I’m going.  But the truth is that there are others that are taking the long way around.   And their lights help me see where I’m going and my lights help them see where they’re going.

Sometimes in life we get to take the road that leads straight to home.  Maybe you found your spouse when you were 18 years old.  Maybe you had a pregnancy that was smooth sailing with no complications.  You have a compliant child who is a breeze to raise.   Your kids get good grades in school.  Maybe your family is in good health and rarely spends time at the doctor’s office. You’re able to pay your bills every month without any problem.  Be thankful because not everyone gets to have these things.

We all have times when we have to take the long way around.  Maybe you’ve been waiting for many years to find your spouse and you wonder when he/she is going to appear.  Or your spouse left this earth and you’re raising young children alone.  Maybe you’re in the middle of a high risk pregnancy that seems long and scary.  Or you’re waiting and hoping that you will one day be pregnant. Maybe you went to the doctor’s office and heard the word cancer and you have to start a long road of treatment.  Maybe you have a chronically ill child and you spend more days in the hospital than at home.

The long way around can seem really long.  We often don’t understand why we have to travel a road that we have no desire to be on.  I enjoyed only a few moments of my high risk pregnancy.  It was a nightmare that ended with our preemies lying in NICU isolettes.  We were so thankful the day that we got to bring our babies home.  The long way around wasn’t without purpose.  A couple of years later a friend found himself in the NICU with his triplets.  Brett was able to encourage him and have empathy for him because he had once sat in the exact same NICU holding our babies.  Our long way around helped someone else through his long way around.

When I pulled into our driveway that night it was still raining cats and dogs.  As I was sitting and waiting for the garage door to open a strange thing happened. The rain instantly stopped.  I could finally see again and it made me smile.  I smiled because I would’ve much rather taken the road that leads straight to home.  But the truth is that I learned more when I had to take the long way around.  I learned that I’m not the only one taking the long way around.  I learned that we need to bring light to our path and help others see where they’re going.  And I learned that sometimes it rains so hard that we can’t see where we’re going.  But the rain will eventually stop and we’ll be able to see again.  Our journey home was longer than I wanted it to be but we still got home.  All that mattered was that we were home.

Raising kids is hard work.  Raising kids with special needs is even harder.  In the midst of the constant demands of life there’s something that I forget to do.  I forget to laugh.   Life’s harder when I forget to laugh.  I’ve found myself laughing more lately.  I don’t know if it’s because our girls are all of a sudden funnier than they used to be.  Or if it’s because I’m slowing down and taking the time to listen to their silliness.  Either way I’m laughing more and life’s definitely better when I laugh.  I thought it would be fun to share some of our recent funnies.  I hope our two turtles will bring a smile to your face and maybe a chuckle or two.

We were in Mellow Mushroom in Destin, Florida a couple of months ago.  Taylor was trying to entertain her sisters while we were waiting on the pizza.  She asked Hope “What do you want me to draw?”  Hope looked up at her and said “An ankylosaurus”.  Everyone at our table began to laugh hysterically.  Taylor looked stunned.  What’s the matter, Taylor?  You don’t know what an ankylosaurus looks like?  I don’t have a clue either.  Taylor’s a risk taker so she took a chance and she drew a dinosaur.  But Hope said he wasn’t right.  Oh well. 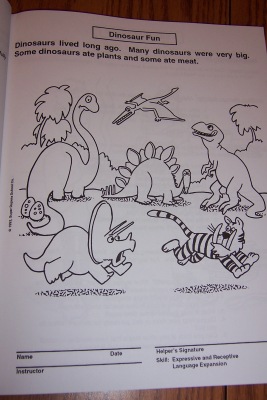 We were working on a language worksheet about dinosaurs.  I made a serious error.  I pointed to the apatosaurus and I called him a stegosaurus.   Hope got really upset with me and said “No mommy!”  It’s not a stegosaurus.  It’s an apatosaurus!”  She said it with a hint of attitude.  It was a “C’mon mommy.  Get it together.  You really should know your dinosaurs by now” attitude.   Boy, I felt foolish.  An apatosaurus has a really long neck and a stegosaurus has spikes on his back.  They don’t look anything alike.  I made a mental note to study my dinosaurs in my spare time.

I held up this sight word for Mikayla.

Me: What’s a chihuahua?

After I recovered from the chihuahua incident we were working on a language page.  I read the directions and asked Mikayla to color the mouse pink. She said “Don’t wanna color him pink.  He’s weird.”  I told her I agreed.  A pink mouse is kind of weird.  But I told her that we need to follow the directions even if we don’t agree with them.  She colored the mouse pink even though it made him a tad weird.

I told Mikayla that she’s pretty.  She said “I’m not pretty.  I’m disgusting!”  And then she giggled for the longest time.

I wrote the number 2 and Mikayla said “That 2 is creepy.”  She said my letter D was creepy too.  It was my very first time being accused of having creepy handwriting. 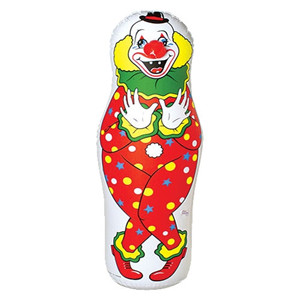 Knock him down; he popped right up.  Clobber him with a bat, pop him in the nose, or give him a swift kick to the side, and he would fall down — but not for long.

We did our best to level the clown.  One punch after the other, each more vicious than the prior hit. None of us succeeded.  Bozo had more comeback than the ’69 Mets.  He wasn’t strong; he was full of air.  He couldn’t duck or defend himself.  He didn’t charm us with good looks or silence attackers with quick wit.  He was a clown, for goodness’ sake.  Red lips and yellow hair.  Yet there was something about him, or within him, that kept him on his feet.

We’d do well to learn his secret.  Life comes at us with a fury of flying fists — right hook of rejection, sucker punch of loss. Enemies hit below the belt. Calamities cause us to stagger.  It’s a slugfest out there.  Some people once knocked down never get up.  They stay on the mat – beaten, bitter, broken. Out for the count.  Others, however, have more bounce back than Bozo.

I remember punching a bounce-back clown when I was a kid.  It’s true.  No matter how many times we would clobber him on the head that silly clown would stand back up.  Why is Bozo able to get up every single time that he gets knocked down?  He gets back up because there’s something hidden inside of him.  Every time Bozo gets punched the weight inside of him acts as a counterbalance.  What’s hidden inside of him makes him stand up again.

What’s inside of me is what makes me get back up after the punches of life knock me down.  God’s Word is hidden in my heart and His words are what enable me to get back up again.  Every time I mutter the words “I can’t do this anymore” I’m reminded that I can.  Because Philippians 4:13 says I can do all things through Christ who gives me strength.  He gives each of us strength to get through the next moment and the next hour.  When I feel like life has punched me in the gut and I’m face down in the dirt I remind myself that Though I have fallen, I will rise. Though I sit in darkness, the Lord will be my light (Micah 7:8)  And I find myself rising out of the dirt, brushing myself off, and going again.

Looking for Something Specific?